WELCOME TO THE FARM 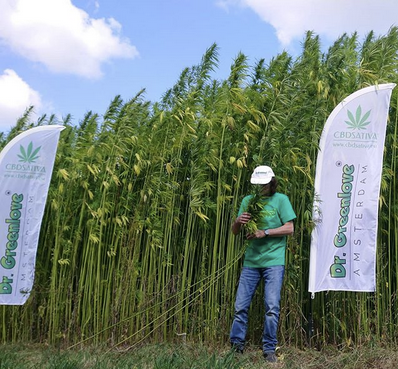 Dr. Greenlove produces a wide range of hemp-based materials, certified CBD products, and artisan food and beverages, all made with premium-quality, locally-grown cannabis. Most Dr. Greenlove products are farm-made and hand-processed at the locations where the crops are grown. Dr. Greenlove works only with EU-certified farmers.

In 1995, company founder Chris and his friend Ed had an idea to bring Austrian pumpkin oil to Holland. Somehow Ed had found out that pumpkin oil, although commonly used in Austria, was not available in the Netherlands.

In their search for pumpkin oil, they found a family business that also made “cold pressed hemp seed oil”. The family processed this healthy, nutty-flavoured oil in the same fashion their great-grandparents did: Cold-pressed, with love and skill, and according to a well-guarded 120-year-old tradition! – Chris & Ed couldn’t resist and brought the hemp-seed oil to Holland.

After introducing hemp seed oil to the Netherlands, Chris discovered another hemp product. A company named Spirit of Hanf produced a real hemp beer with 7% alcohol but no THC (the active ingredient in marijuana). Chris enthusiastically added this cannabis beer to his collection. The 1990s were optimistic times for the European hemp industry. Legal (and even subsidized) hemp crops were now being grown in Holland, Austria, Switzerland, Germany, France, Spain, and England. With these new crops came newly developed products.

Around this time, Ed decided to stop because he wanted to get more involved with his wine import, and so, after adopting the new name Hemperium, Chris went on with the hemp trade– full-time.

Into The Future, Back To The Roots

In 1999, Hemperium proudly launched its first self-developed cannabis product, THE absolute original Cannabis Lollipops, made with 100% natural European cannabis oil and terpenes. Chris received lots of compliments for his new creation. He decided, therefore, to enter them for an award at the prestigious High Times Cannabis Cup, held annually in Amsterdam. In November of that year, with the new website finished just in time, the company presented its cannabis candy at the award show. It turned out a huge success because, to Chris’ surprise, Hemperium won the award for Best Hemp Product, spectacularly followed by another 1st prize at the Haarlem Hemp Awards a few weeks later.

The turn of the century brought more success for Hemperium when Chris, with his new company slogan “Into the future, back to the roots”, introduced his all-new Cannabis Chocolate. “At the 14th High Times Cannabis Cup in 2001”, Chris recalls, “I was standing behind my candy stand, selling my hemp candy and space cake, when they suddenly called me on stage!”. Chris’ cannabis products had won the award for Best Hemp Product – the second year in a row! This time for his fine Cannabis Chocolate!

In early 2010, Chris felt the time had come to take a step back and prepare himself for a seriously easy-going life in the tropics. A little while later, he traded the Netherlands for a secret spot in paradise, leaving his company in the hands of his friends and long-trusted partners at Dr. Greenlove Amsterdam.

Stepping into the future together, Hemperium and Dr. Greenlove focused on creating and producing new cannabis (hemp, cannabidiol) products and applications. Under the banner of our wellness and health food brand, CBD Sativa, Dr. Greenlove developed a series of unique and innovative cannabidiol products, such as an all-natural CBD tea line, chewable CBD tablets, CBD candy, CBD chocolate, and CBD water. With the help of Hemperium, Dr. Greenlove greatly expanded its catalogue, adding many exciting new originals such as cannabis instant hot chocolate and coffee, a whole range of cannabis herbal infusions, and cannabis gummy bears.

Dr. Greenlove did a try-out in 2015 in Amsterdam and opened the world’s first cannabis ice cream shop. Although this project in the centre of Amsterdam was temporary, it gave rise to the idea of making our authentic, cold cannabis scoops available in a way that stores, other than our cute, cosy ice cream parlour, could sell it too. What we came up with was again a first: The world’s first prepacked Cannabis Ice Cream!

From Amsterdam to the rest of the world.

As we leap into an excitingly new decade, Dr. Greenlove has planned many more new products and applications. We, for one, can’t wait for what comes next! We, therefore, hope you will keep joining us on this website.

With the launch of this new website, Dr. Greenlove has solidified its standing as an essential cannabis food producer. Its pages are filled with delicious finds for health, wellness, food, and fun! Dr. Greenlove’s original food products are currently sold in more than 500 shops and stores in Amsterdam, Europe, and beyond.